Hey! Have you read... Humble Pi: A Comedy of Maths Errors? 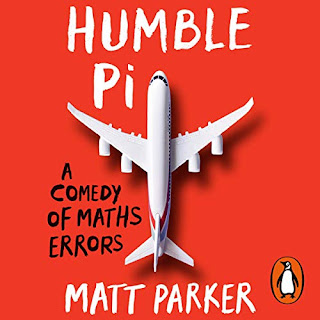 
**The First Ever Maths Book to be a No.1 Bestseller**


I was watching YouTube a few weeks ago and I happened upon a video of Matt Parker's RICL entitled: What Happens When Maths Goes Wrong?  I have watched a few of Matt's videos before (check out his Stand-Up Maths channel; you won't regret it) but had never really put a name to the face.  This was an example of 'oh, that guy!'
I won't get into the video beyond saying that it is worth a watch if you have an hour spare.  I'll link to it below.  No, this post is about the book that was launched to coincide with this lecture - Humble Pi: A Comedy of Maths Errors.

First off, this book is intended to be read by those of us not proficient in the deeper level of mathematics.  I'm sure that you would still get a kick out of it if you know Euclid's Elements word-perfectly, but that, alas, is not me, so I can't speak to that.  What I can do is reassure everyone that the maths contained in this book is anecdotal only; there is no need to reach for a calculator.

Rather, this book is a collection of stories from across the history of, as the title suggests, mistakes made in the field of maths.  It ranges from simple division mistakes (resulting in quite a spurious assertion made against Obamacare) to quite drastic errors resulting in life-threatening situations.

Without getting into spoilers, the book should take about a week to get through, so it's not that hard going.  Most of the time will be taken up with you reading paragraphs aloud to anyone in the room willing to listen.  My poor wife was the victim of many 'can-I-just-read-you-one-more-bit...?' instances.  But the book is that entertaining!  It's written in in the same light-hearted tone that Parker uses in his videos and you can hear his slight Australian twang emanating from the page.

Why should I care?

Not only is it a very entertaining read; it is filled with examples of maths being applied in real-world situations.  As Parker points out several times, maths is everywhere. He even asserts that civilization would not have evolved had it not been for mathematics.

Enter that child who says 'I don't care about [insert difficult maths topic here]; I'm never going to use it.  You will find an example where it has been used.

Much more importantly though, for all those children who beat themselves up for making a mistake, or worse, refuse to even take the risk in the first place, this book serves as a celebration of mistakes.  That, I think, more than anything is the most important take-home for children.  If learning is a journey, then it is one over a very deep and dangerous lake of knowledge.  Mistakes are the stepping stones across that lake.  For children to know that mistakes are things that adults make as well is so important.

This book does not shy away from how difficult some areas of maths can be.  For that matter, it doesn't shy away from how easy it is to complicate simple maths to the point of obfuscation (forgive a little pretension: I love the word 'obfuscation').  Again though, I think it is important for children to be told that sometimes, things are difficult.  Parker highlights this and quotes himself towards the end of the book:


Mathematicians aren’t people who find maths easy; they’re people who enjoy how hard it is.

Where can I get a copy?

Humble Pi: A Comedy of Maths Errors is available now from all good books shops both in the real world and online.  You can also get it direct from www.mathsgear.co.uk, where you will find links to more of Matt's stuff, including merchandise from the brilliant Festival of the Spoken Nerd.  Or you can just click the link below: