Two gifts from me to you, lovely people who read my blog!

live since September 27, 2019
Hello everyone!  I am feeling slightly manic this week, as I have started my MA in Educational Assessment at UCL on top of earning enough money through teaching to stay alive.  It's all very exciting.

Anyway, we are all life-long learners here and we are all time-poor so I thought I would share  game ideas that you can use at home, in the classroom, in your cosy space with the gentle wallpaper (it's NOT a padded room)...  One for maths and one for English.﻿

Let's begin with the English, shall we?

This is a twist on an old meme, really.  My wife and I were WhatsApp- the other day (we are a professional couple;  is how we communicate - don't judge!) and she mentioned that Cinderella, played backwards is the tragic story of a princess who loses everything after making a deal with a cruel fairy.﻿

So this got me thinking, instead of re-writing traditional tales as newspaper articles or diary entries, why not flip them around and write them backwards?  There are some excellent examples on Reddit here.  I think it's a fun idea and I bet there is at least a week of solid writing, discussion and drama; even two.

If you try this and end up with some great examples, I'd love to read them!  Please send them to me (tragiclantern@gmail.com)!  It'll be great to curate a selection online to inspire other classes.

So that's English, now for maths (I'm very excited about this)...

I have invented a game!  It's a fun card game that uses arithmetic to attack and destroy your opponent's defences.  with 2-4 players (you could play with more if you have multiple decks of cards) and is good for any age because players differentiate based on their ability.  in teams, encouraging discussion and explanation of arithmetical ideas.

This is a competitive maths game for two people to test their skills at manipulating numbers by using basic arithmetic to outsmart their opponent and destroy their castle!


The aim of the game is to battle through your opponent’s defences and destroy their shields by creating number sentences using the cards in your hand.

The set up:
How to play: 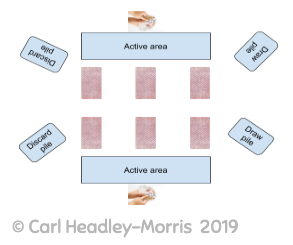 Restoring shields:
If a shield card has been broken, you can choose to ‘fix’ it by:
You can only fix a broken shield.  You cannot replace a lost one.

I begin my go by drawing 2 extra cards:

From this hand, I can make the following number sentence:

This is a valid number sentence so I can break one of my opponent’s shield cards by turning it over.

I then discard the cards I used and am left with:

It is now my opponent’s go.

Remember to draw two extra cards at the beginning of your turn!

My hand (after drawing two to begin the turn):

I can make the following number sentence:

These cards are discarded and turn ends looking like this:
My hand (after drawing two to begin the turn):

I've trialled this game with children aged from 6 all the way up to 15 (and some of them have gone on to teach their parents), so it definitely works for all ages.  It's really fun.  It's a great way to reinforce arithmetic.  Please use it and let me know what you think.  I'm looking into having it manufactured and made all pretty, but that's a while away and I wanted to share it now.

Thank-you so much for reading these posts.  I who any of you are (tell me in the comments below!) but I really appreciate it.  Have a great week and keep smiling - you never know who needs to see it!